When discussing the topic of seafood, lobster is easily the most decadent. Often associated with high society and decadent feasts limited to those with a disposable income. At Captain Eddie’s seafood, we agree that lobster is delicious and decadent, but it’s also accessible to anyone who wishes to partake. We’re dedicating the second Wednesday of every month to this delightful dish. Aside from its succulent taste, lobster is healthy for you. Don’t believe us? Read on to learn about how beneficial lobster is as a regular part of your diet. 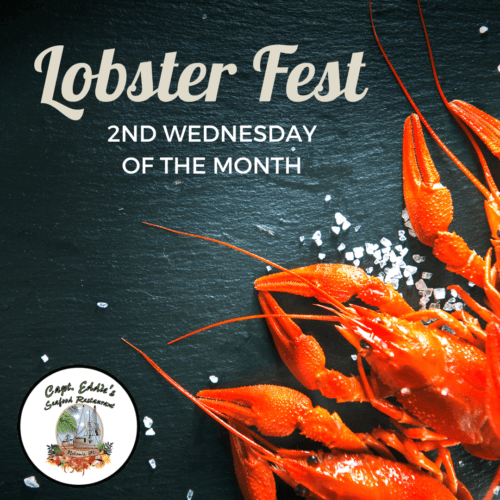 A Not So Decadent Past

While lobster has acquired a reputation as a dish that reflects a person’s social status, it wasn’t always the rich and famous who were associated with the shellfish. Early American colonists regarded lobster as a symbol of poverty, with a can of beans pricier than a pound of lobster until the 1940s. While the price of lobster has risen during the past few decades, its healthy attributes have always been consistent.

Health in a Half Shell

Like many other varieties of seafood, lobster contains a considerable amount of nutrients and necessary ingredients, which help promote a healthy lifestyle. A single serving of lobster (145 grams) contains over 27 grams of protein, no carbs, and just over one gram of fat. In this same portion, you receive three percent of your daily iron and vitamin A requirement and nine percent of your recommended calcium allowance. Lobster also contains considerable amounts of fatty acids that help regulate your body’s cholesterol and reduce the risk of stroke and heart disease.

Additional Benefits Courtesy of Our Friend, the Lobster

A recent medical study concluded that the regular consumption of shellfish such as lobster can reduce the risks of obesity and diabetes. The American Heart Association recommends that adults have two to three servings of fish per week to promote heart health due to the high concentrations of fatty acids in many fish species.

Lobster is also rich in selenium. Selenium allows the human body to metabolize hormones and can greatly reduce the risk of thyroid disease. Recent studies have also shown that increased selenium intake can improve mental health and treat ADHD and depression. The rich copper content in lobster can also combat anemia due to its benefit of working with iron to form stronger red blood cells.

Get Your Fill at Captain Eddie’s Seafood

The second Wednesday of each month is devoted to the lobster. At Captain Eddie’s Seafood, you’ll find a wide variety of seafood in our restaurant and our on-site fish market. For a menu and reservations, swim over to captaineddiesseafood.com.