The ocean provides us with a wide variety of delectable food that humans have been taking advantage of for thousands of years. Among the creatures great and small that have unsurpassed popularity are shrimp. They’re abundant and can be prepared in a variety of ways. A point of debate for the most dedicated seafood aficionados is whether they’re better served with the head on or off. Today, we’ll attempt to get to the bottom of this dilemma. 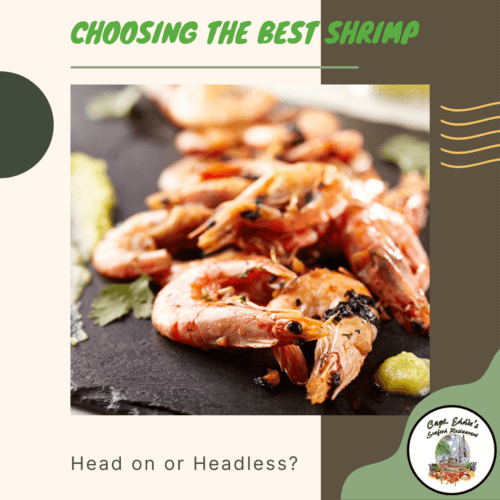 It might not be widely known, but most of the fat of a shrimp is located in its head. (As are their hearts.) When the head is left intact when shrimp are cooked, the consistency of the body becomes quite chewy and mushy. Many people enjoy seafood because of its lack of fat and high protein concentrations. By removing the head, much of the fat is removed from the shrimp, and they retain their crunchy consistency. Some people insist on leaving the head intact because they believe it greatly enhances the flavor of the shrimp. However, headless shrimp can retain just as much flavor by leaving the shell intact. This is why many dishes that include shrimp leave the skin on to enhance the flavor.

Removal of the Head

Removing the head of a shrimp before cooking isn’t as easy as it might seem. There are a few pointy parts, so you must avoid them when handling the crustacean. It can also get rather messy, so have some paper towels handy. Firmly grip the shrimp with your thumb and index finger and remove the head in a single sweeping potion. Dispose of the heads in a proper place and wash the remaining shrimp bodies thoroughly before cooking.

What’s the best way to serve up shrimp? Truth be told, there is no “right” or “wrong” way to do so. It all comes down to what kind of taste you want and whether or not you’re paying attention to the amount of fat you’re eating. If you’re looking for more protein and a crunchier fish, it’s best to remove the head before cooking. If you’re looking for a softer taste and don’t mind a little more fat, leave the head intact. Either way, enjoy it!

At Captain Eddie’s Seafood, we serve up the very best dishes of fish as well as finely crafted cocktails. We also have a fish market on premises for those who enjoy cooking at home. For reservations and more info on us, cast your nets at captaineddiesseafood.com.